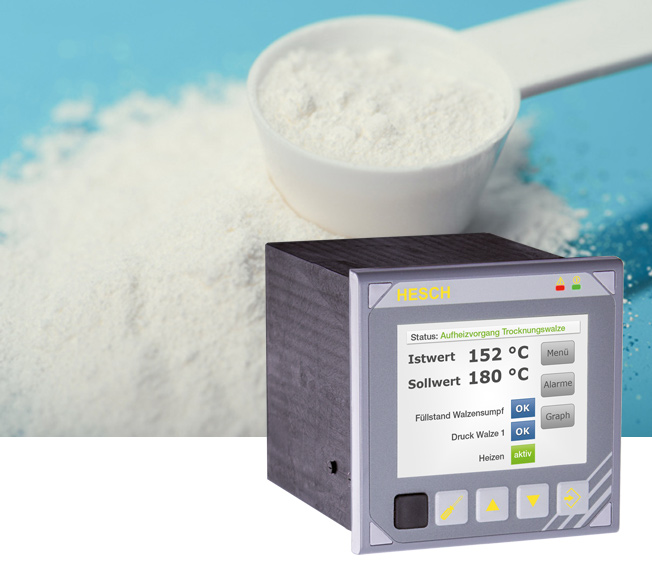 A manufacturer of food additives was looking for an easy to use control for the automation of his casein drying plant. The device was supposed to control complex processes and communicate with a PLC. The multifunction controller (MFC) was the only system that fulfilled all requirements of the company.

Accelerated heating process: only 3,5 hours after optimization instead of 8 to 12 hours.

No more burning of the product: quick amortization due to higher yield and lower maintenance costs, because nothing burns anymore

No more manual control necessary because of automated manufacturing plant.

Everything perfectly controlled in casein production

How the multifunction controller optimizes the production of food additives

Without casein, many industrially produced foods would not exist because the protein gives them their structure. Caseines, for example, have a forming and foam-stabilizing effect on ice cream and desserts, They give cream cheese and sausage meat an even consistency or function as a binder for gravy and convenience food and guarantee the freezing and defrost resistance.

In the food industry, casein is often used in powder form. One of the production steps for the substance production takes place at the roller drying plant. Here, the casein, previously obtained through ultrafiltration, concentration and drying from pasteurized milk, is processed.
Liquid casein is transmitted as a thin film by conveyor pumps to two large, steam-powered drying rollers, which have a temperature of about 180 ° C. Due to the heat, the moisture in the casein evaporates, creating a granules that is ground into powder in a downstream mill.

Entire process was controlled by hand

When transporting the casein liquid to the main rods, the conveyor pumps are supported by smaller transfer rollers. The space between these small rollers is called a roller sump. The product is conveyed into one of the sumps. The fill level is measured in the other sump. Thus, the rollers are evenly coated with liquid. If the fill level is too low, too little liquid is applied to the rollers and the product starts to burn.

As important as controlling the fill level is monitoring the surface temperature of the roller and the intensity of the steam pressure. The manufacturer of food additives controlled this process manually so far, which was very expensive and time-consuming. The product supply was controlled via potentiometers, which had to be controlled by a staff member permanently. It often happened that the rollers were not evenly coated or the roller temperature was too high, so that the product burned and became useless. As a onsequence, the roller knife which separates the dried casein from the roller wore out very quickly.

MFC only can fulfill all requirements.

In the price range that was considerable, the casein manufacturer chose the HESCH solution. The MFC can also communicate with a PLC, is easy to operate and offers individual user interfaces which can be implemented without programming skills. That was a prerequisite. With the multifunction controller, HESCH has launched a controller that can also regulate complex processes while costing significantly less than a PLC.

Processes have been vastly improved with the MFC

In the casein drying plant, the MFC has significantly optimized the processes. Until now, it took 8 to 12 hours for the rollers to be heated up to 180 ° C operating temperature, the same process now takes only 3.5 hours. The MFC is also involved in other auxiliary processes in the drying plant. It controls the product pump in conjunction with the fill level measurement in the roller sump and monitors the surface temperature and vapor pressure in the roller. If the surface temperature of the roller changes due to a modified rotational speed, the MFC reliably regulatesand thus guarantees a consistently good product.

The yield of the casein drying plant has increased significantly sincethe installation of the multifunction controller, as the product does not burn anymore. This also shows in the lower wear and tear of the roller knives. Since the product does not burn anymore, the knives are a lot less stressed and the maintenance costs for the plant decrease. But the main advantage of the MFC is that the staff members have a lot more time for other important jobs now, instead of controlling the processes manually like before. Now, they can focus more on the entire production.

Do you also want to optimize your plant or plan to put a new plant into operation?
The MFC is suitable for both purposes.

We are happy to work with you to determine your needs and create a non-binding offer for you.